Sometime early last month, I felt the need to get a deck of playing cards. There were multiple occasions where I thought to myself how much nicer it would be if I had some cards on me, so that was my reasoning. Being the disgusting weeaboo I am, I wanted to get something related to anime. I remembered that the card designs in No Game No Life looked really neat, and became dead set on getting a replica of those cards.

But sadly, nothing of the sort existed at the time. The NGNL poker cards available for sale were all just standard cards with anime characters lazily substituted in for face cards, and the two efforts I discovered to recreate them both appeared to be inactive. The only option left was to make the cards myself, and that’s what I set out to do. 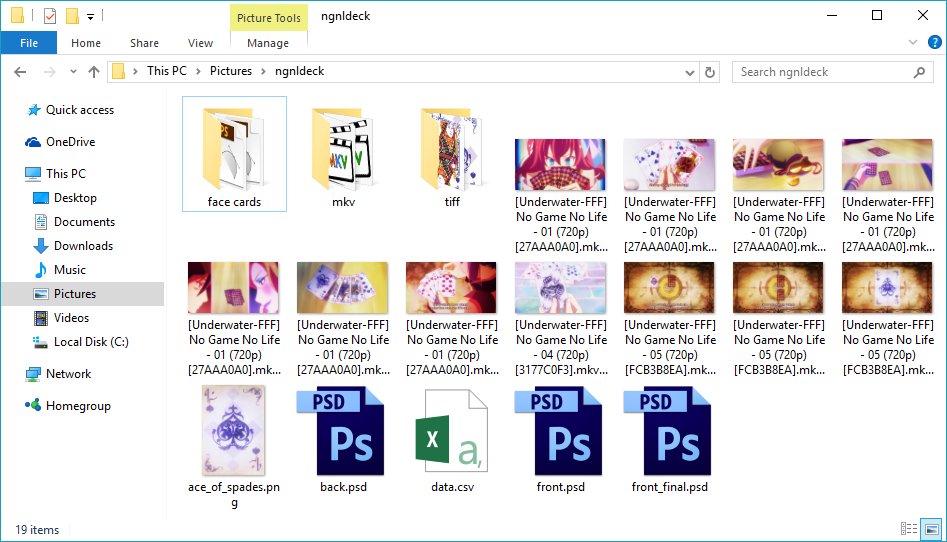 I downloaded NGNL episodes 1, 2, 4, and 5 to use as reference. I used 720p video, but in retrospect 1080p video probably would have produced slightly better results. The cards turned out fine in the end, so I guess it wasn’t really much of an issue.

I already knew through my previous searching that a font existed for the numbering (and spelling) system used by the Imanity, so I downloaded this and used it for the rank numbers on the cards. It took me longer than I’m willing to admit to figure out that the glyphs for the numbers 10 through 13 on the cards used the circle numbers ⑩, ⑪, ⑫, and ⑬. I had assumed that it would use ligatures or something for the double digit glyphs, and I had to open the font in a font viewer to figure it out.

Then I vectorized all the suits, the emblem in the corner, the ace of spades, and the borders on the face cards. This was my first time using the Pen tool in Photoshop, but I got the hang of it pretty quickly. Putting the suit in a Photoshop Smart Object made it simple to switch between the suits. I used the data-driven graphics feature of Photoshop to generate the card ranks 1-10 four times, one time for each suit.

For the face cards, I realized that the ones used in the show used this style of cards as a reference, and poked around online to see if I could find any existing vectors of this style of cards. Lo and behold, I found exactly what I was looking for. These vectors were conveniently licensed under CC BY 3.0 US, and I modified their colors to use in my deck. Do note that NGNL did change up what the face cards were holding; replacing weapons with stuff like scrolls or scepters – I wasn’t confident enough in my Illustrator ability to make those edits, and only around five face cards even showed up in the show, so I decided to just keep the weapons as they were. 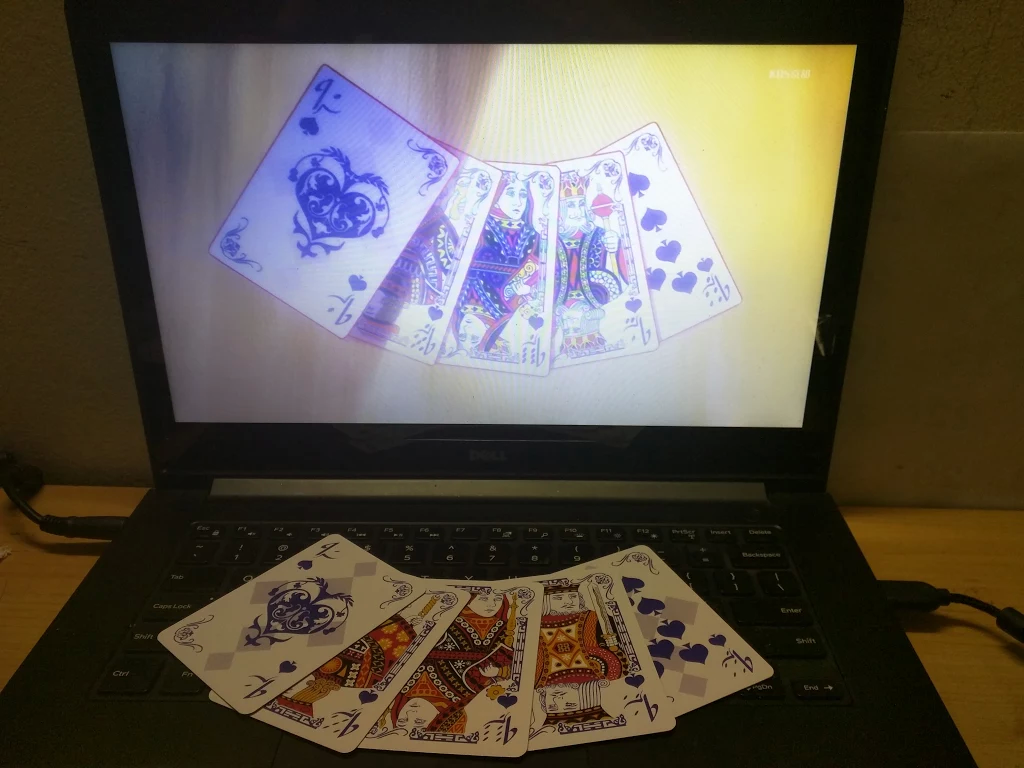 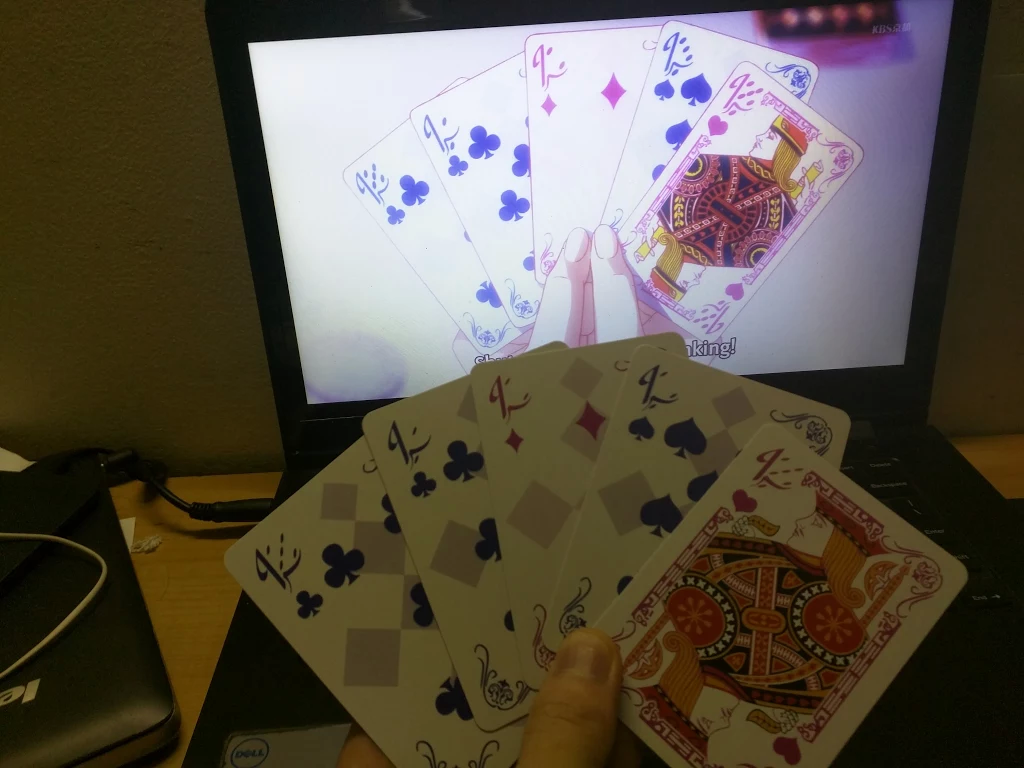 For the jokers, I kind of just got lazy and upscaled the original images from episodes 4 and 5, and adjusted the hue to match the other cards. I made some minor edits but there really wasn’t much else for me to do, other than vectorize the whole thing from scratch which would have been a huge ordeal without much benefit. 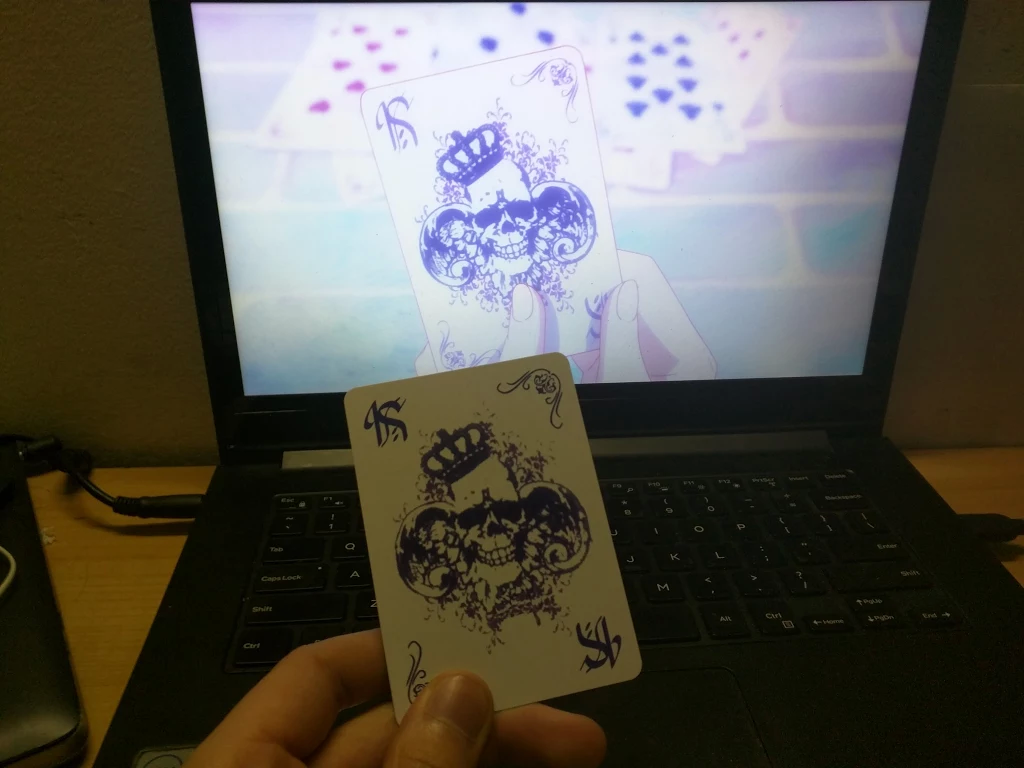 Finally, I created the back by editing this thing from the 2nd volume of the NGNL soundtrack; I made the decision to make it have rotational symmetry because I wouldn’t want to have a deck of cards with card backs that have a right or wrong side up, if that makes any sense. I also tried to make it brighter, but I don’t think I went far enough. 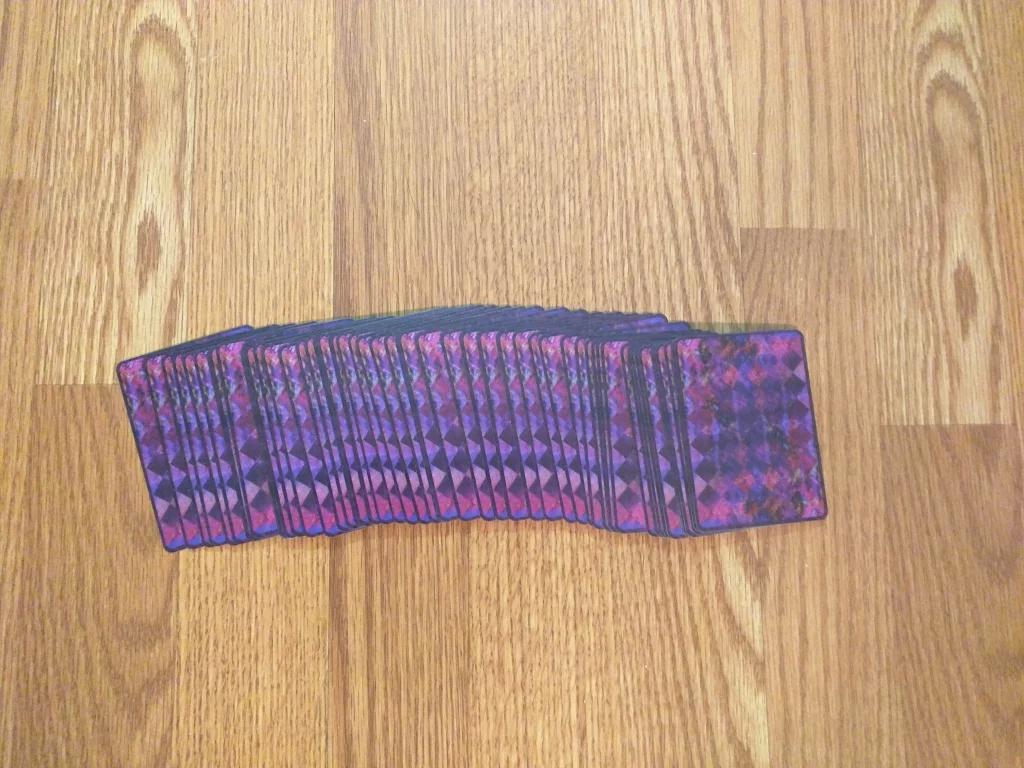 After creating a separate .psd file for each card (most of which were automatically generated through Photoshop variables), I ran another script to convert them all into layerless .tif files, and uploaded them onto makeplayingcards.com. 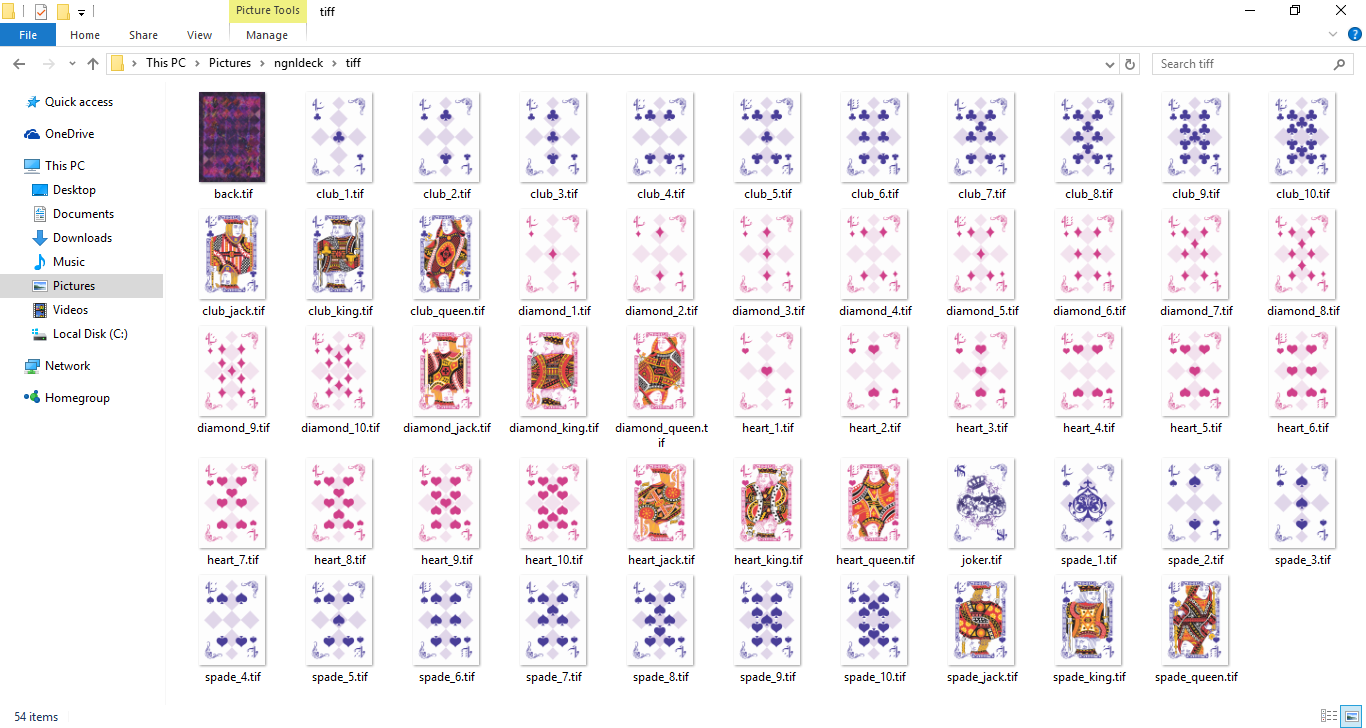 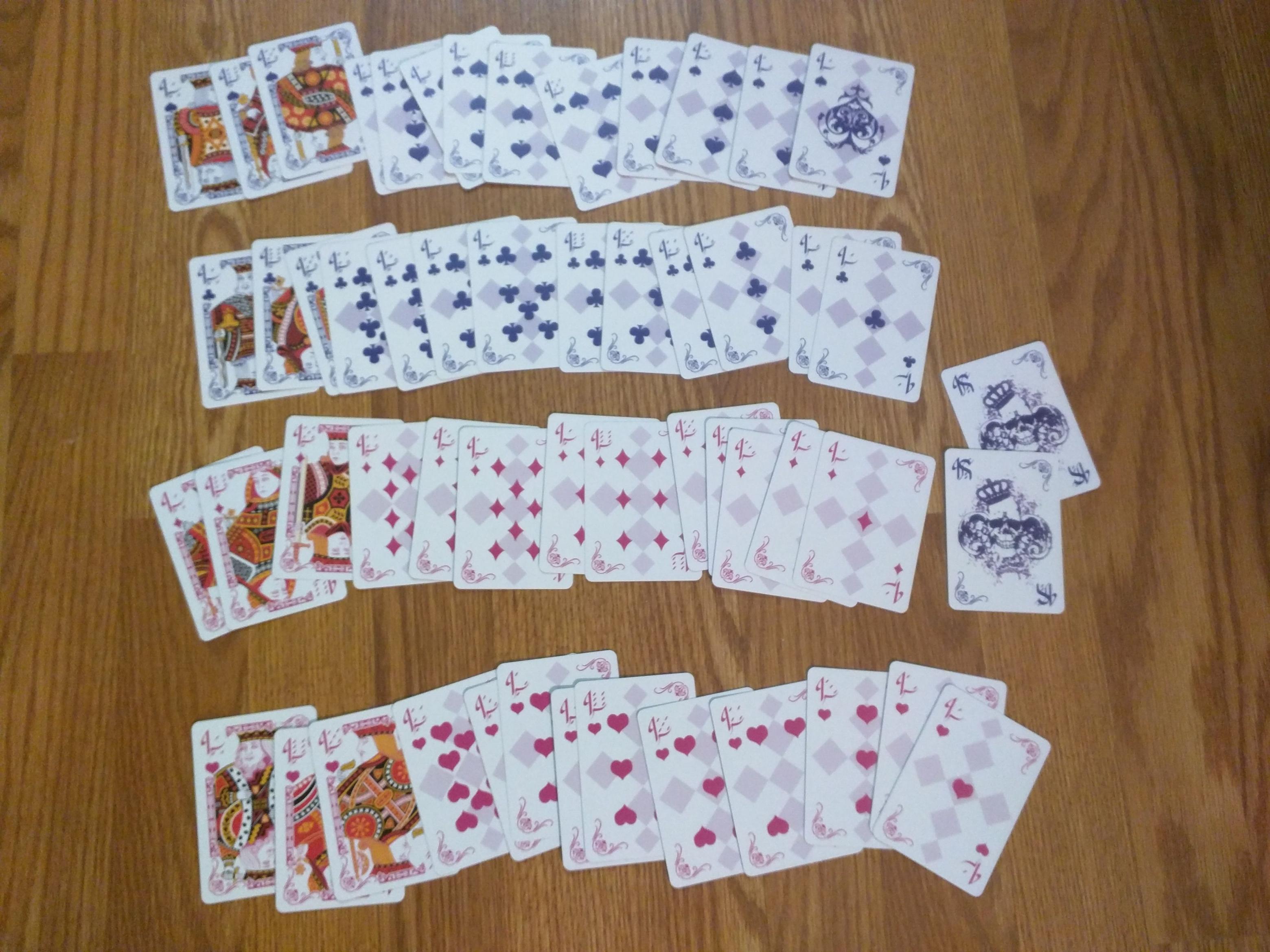 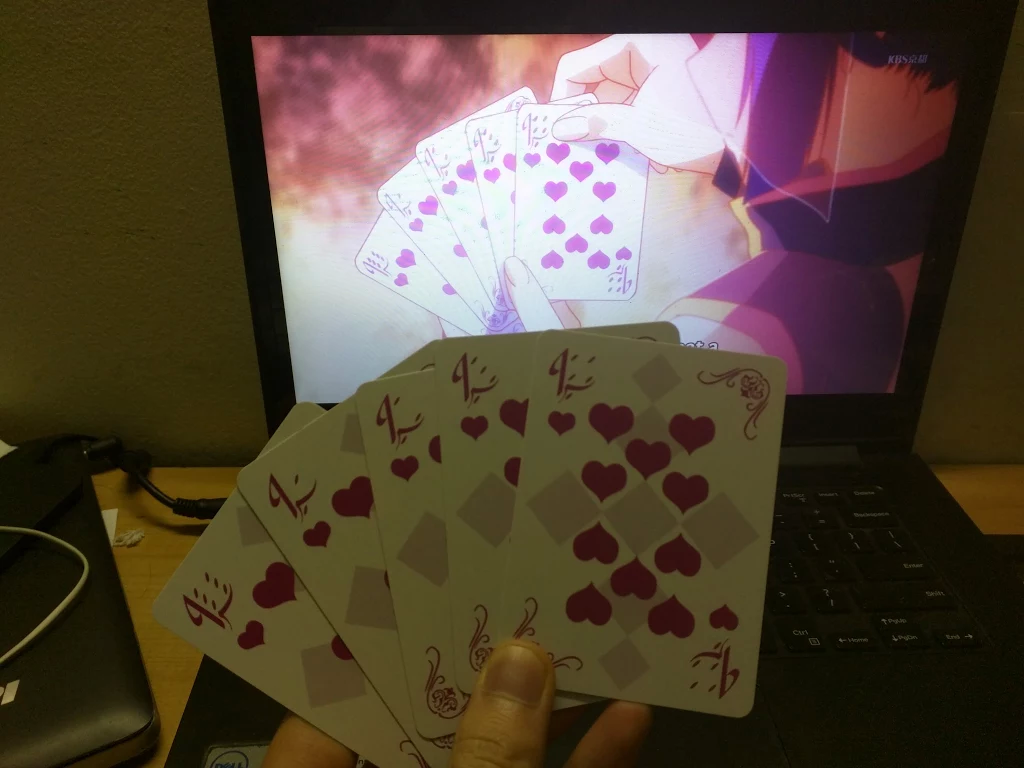 And that’s where I am now. Several people have expressed their interest in purchasing a deck, so I’ll probably go and create an Etsy account or something. I’ve never sold anything online before, so I’m going to take some time to explore my options.

Oh, and a one day late happy Chinese New Year!